Through a discussion of power dynamics with a critical eye towards the political situation of influential Christian leaders including Constantine, Damasus, Ambrose, and Augustine, Death’s Dominion demonstrates the ways in whic 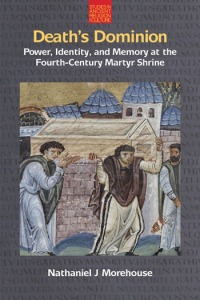 Late in the fourth century pilgrimage created a network within Christianity which ultimately led to a catholic Christian understanding of the martyrs’ graves by broadening the appeal of regional practices to disparate audiences. This simultaneously reinforced and subverted the desired message of those who sought to craft the meaning associated with the martyrs’ remains. Pilgrims helped manufacture a homogenized understanding of the martyr cult ultimately enabling it to become one of the most identifiable features of Christianity in subsequent centuries.