Books of Interest: An Ancient Theory of Religion: Euhemerism from Antiquity to the Present

Nickolas P. Roubekas, An Ancient Theory of Religion:Euhemerism from Antiquity to the Present. Routledge Monographs in Classical Studies. New York and London: Routledge, 2017.

An Ancient Theory of Religion examines a theory of religion put forward by Euhemerus of Messene (late 4th—early 3rd century BCE) in his lost work Sacred Inscription, and shows not only how and why euhemerism came about but also how it was— and still is—used. 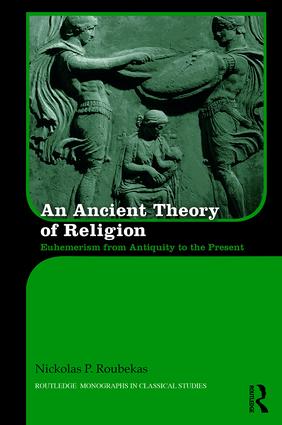 By studying the utilization of the theory in different periods—from the Graeco-Roman world to Late Antiquity, and from the Renaissance to the twenty-first century—this book explores the reception of the theory in diverse literary works. In so doing, it also unpacks the different adoptions and misrepresentations of Euhemerus’s work according to the diverse agendas of the authors and scholars who have employed his theory. In the process, certain questions are raised: What did Euhemerus actually claim? How has his theory of the origins of belief in gods been used? How can modern scholarship approach and interpret his take on religion? When referring to ‘euhemerism,’ whose version are we employing? An Ancient Theory of Religion assumes no prior knowledge of euhemerism and will be of interest to scholars working in classical reception, religious studies, and early Christian studies.

This opening might be of interest to NAASR members:

Nebraska Wesleyan University invites applications for a full-time, 2-year Visiting Assistant Professor with expertise in teaching Bible within a Liberal Arts Curriculum, beginning August 2017.
Department: Religion
ResponsibilitiesDuties include teaching biblical courses in a newly inaugurated liberal arts general education program focusing on themes of Identity, Globalization, Justice, Democracy, Gender, and designated skills in writing, speaking, and diversity within the US and globally. Familiarity with the discipline of Religious Studies and knowledge of the social, political, and historical study of Christianity is preferable. The successful candidate will participate in our liberal arts general education program, the Archway Curriculum.  The annual teaching load will be 9 – 12 credits per semester. Applicants with Methodist affiliations who can help prepare students for seminary are encouraged to apply.Nebraska Wesleyan University is an independent Methodist liberal arts university of approximately 2,000 undergraduate and graduate students in Lincoln, Nebraska. The University’s steadfast commitment to putting learning into action through internships, study abroad, service learning and collaborative research has yielded tremendous outcomes for students and alumni.
Qualifications
* PhD or be ABD from accredited program in Religion
* Expertise in Bible
* Familiarity with the discipline of Religious Studies
* Knowledge of the social, political, and historical study of Christianity
* Experience with teaching biblical courses in a liberal arts education program
* Demonstrated critical thinking and time management skills
* Demonstrated ability to communicate effectively with a variety of constituents
* Demonstrated written and oral communication skills
Commitment to DiversityNebraska Wesleyan University is an equal opportunity employer and is committed to recruiting, hiring and retaining members of racial/ethnic groups under-represented in higher education. Applicants with disabilities are invited to identify any necessary accommodations required in the application process. E-Verify, EOE.
How to Apply
To apply, please send cover letter, resume/CV, sample syllabus and three professional letters of reference.  A statement of teaching philosophy is optional.  Electronic submissions are strongly encouraged and should be sent to Maria Harder at mharder@nebrwesleyan.edu(link sends e-mail).   Review of applications will begin immediately and continue until the position is filled.