2015 Call for Proposals: Theory in a Time of Excess

Although the terms “method and theory” can now be found in course titles, curricula/degree requirements, area/comprehensive exams, and listed as competencies on the CVs of scholars from across a wide array of subfields, and while a variety of groups at annual scholarly conferences itemize theorizing among the topics that they routinely examine, it seems that few of the many examples of doing theory today involve either met-reflection on the practical conditions of the field or rigorously explanatory studies of religion’s cause(s) or function(s). So, despite the appearances of tremendous advances in the field since NAASR’s founding as the lone place for carrying out theory in the study of religion—when “theory” was indeed a rare word and was often replaced with the more neutral “approach”—it can be argued that little has changed.

The upcoming 2015 meeting in Atlanta marks the organization’s 30th anniversary and so the NAASR program will be divided into two related parts: (i) an invited Presidential Panel on the history of NAASR and the changing (or not) circumstances of its present and possible future and (ii) four separate panels (all leading up to the Presidential Panel), two hours in length each, all exploring a variety of views on how one carries out theorizing in the academic study of religion today—when almost everyone claims to be a theorist but few seem to do theory.

Each of the four panels will focus on one substantive statement on what theory is (or is not) and what can (or cannot) be accomplished by adopting a particular understanding of the requirements of theorizing in the human sciences. This call for proposals is therefore devoted to having NAASR members submit approx. 250 word abstracts from which the Program Committee will select four papers, each of which presses members to consider different issues involved with defining and doing theory in the academic study of religion. The abstract must make clear the submitters understanding of what constitutes theory while also summarizing the direction of his/her argument and any examples/data domains with which the presenter will work.

Note: Proposals selected will need to result in substantive and original essays, of approx. 4,000-5,000 words in length, that will be submitted to NAASR in PDF form by no later than October 1, 2015, for pre-distribution to all members. Also, these papers will not be read in Atlanta but, due to the pre-distribution, presenters will have 15 minutes to orally summarize their arguments. Respondents will then be invited by the Program Committee to work with each paper, applying and testing its argument.

Our goal is to publish the collection in MTSR or another appropriate venue.

Submit all proposals, by no later than February 15, 2015, as PDF file attachments to:

NAASR Vice President and Chair of the Program Committee 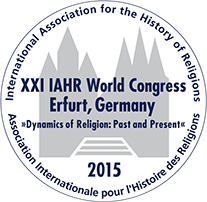 **Update: the deadline for panel proposals have been extended to 15 December.**

The deadline for panel proposals for the 2015 IAHR World Congress—to be held in Erfurt, Germany—is 14 September 2014! (The deadline for individual paper proposals is a little further off: 15 December 2014). You can find out more about the IAHR Quinquennial meeting by checking out the IAHR website or the conference website.

Here’s are the details for the call for panels:

We invite contributions from all disciplines of religious studies and related fields of research to allow for broad, interdisciplinary discussion of the Congress topic to register their panels for the XXI World Congress of the IAHR. Panels should address one of the four thematic Congress areas: Religious Communities in Society: Adaption and Transformation – Practices and Discourses: Innovation and Tradition – The Individual: Religiosity, Spiritualities and individualization – Methodology: Representations and Interpretations.

Each panel lasts two hours. Panel papers should be limited to 20 to 30 minutes, depending on the number of panel participants. Panel conveners are asked to approach possible participants from different nations to reflect the scope and internationality of the IAHR Congress.

To propose a panel, please submit a general proposal of the panel as well as individual proposals of all papers included in the panel. Both panel and papers of a proposed panel will be evaluated by the Academic Program Committee to ensure a high academic standard of the Congress program. We therefore ask panel conveners to submit the proposals of all prospective panel participants of a proposed panel as indicated by the submission form. Proposals of panels and of papers should not exceed 150 words.

The deadline for submission of proposals is Sunday, September 14, 2014. All proposals must be submitted electronically via the IAHR 2015 website (www.iahr2015.org). As part of the submission process, you will be asked to indicate the area in which you would like your proposal considered. Your proposal will then be forwarded to the appropriate member of the Academic Program Committee.

You will receive notice concerning the status of your proposal as soon as possible and certainly before March 1, 2015. If your panel or paper has been accepted by the Academic Program Committee, please note that you will have to register as Congress participant before May 15, 2015 to be included in the Congress program.